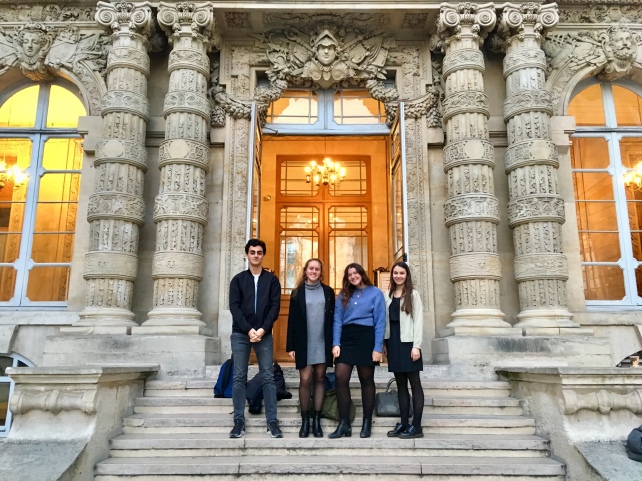 This year, Ms. Andrea Clarke, one of the newest Anglophone Section teachers, helped to create the newest activity in the Section: the AS Debate Club. Ms. Clarke describes it as “a space for students to think critically, formulate arguments and most importantly, remain calm under pressure.”

So how does a debate club work? The AS Debate Club is made of sessions where “we deal with various controversial issues (topics the students have an interest in, or hot topics that have appeared in the news). Each side has time to prepare and then we usually conduct an informal debate.”  Furthermore, the debate sessions are quite diversified, as Ms. Clarke said herself: “Every session differs. Sometimes we watch videos, or we have discussions.” Therefore, “it allows and encourages students to take on a different perspective and look at all sides of a debate.”

On Thursday, March 28, after much practice, the AS Debate Club traveled to Ecole Massillon in the 4th arrondissement of Paris to  participate in its first ever debate between three schools: Camille Sée, Massillon and La Tour. Four 2EA students were accompanied by Ms. Clarke and Ms. Colas.

Ms. Clarke gives her impressions: “The friendly debate at Massillon was a first for the La Tour students. Our opponents were from Camille See. We were debating whether street smarts are better than book smarts. Unfortunately, our side did not win, but we got great feedback from our judge, and Alexandre Urbain was awarded best speaker.  Instead of feeling deflated our debaters took notes and found the experience very educational.”

If you are interested in participating in this new club next year, talk with Ms. Clarke, she will be very happy to take you in.