Yayoi Kusama, born in 1929 (now 89 years old), is a Japanese artist who is self-described as an “obsessional artist”. She is known for her exaggerated and obsessive use of polka dots and for her “infinity installations”. She is a painter, sculptor and performance artist. She began painting as a child by herself, however, at about the same time, she began having nightmares and hallucinations that often evoked dots. Throughout her career, these dots haunted her and became the centre of her art.

She had very little training, studying art solely in 1948-49 in Japan. Family conflicts drove her away from her natal country and toward New York in 1957. Before leaving, she destroyed many of her early paintings. 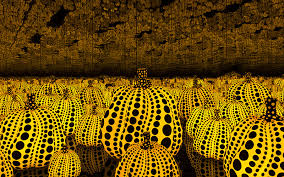 During, the first few years of her new life in New York, she created what she calls the “infinity net” paintings. They consisted of an infinite amount of dots on huge canvases, without regarding the edges of the canvas, therefore being infinite.

Obsessive repetition continued to be a theme in Kusama’s sculpture and installation art, which she began to exhibit in the early 1960’s. Installations from that time included “Infinity Mirror Room-Phalli’s Field” (1965), a mirrored room that reflects an infinite amount of lights, as the mirrors are perfectly face to face.

I went to see the exposition last year, and even though her sculptures and most of her paintings did not mark me that much, her “infinity installations” and paintings of dots were captivating and very impressive, we can clearly see her obsession with dots.