As May Day was being celebrated worldwide, Macron’s political opponents and unions marched through the streets of Paris to protest against the President’s politics. May Day has a long history of bringing workers together since the French Revolution took place. This year was no exception as more than 20 000 people marched according to the police, and 55 000 according to the CGT, France’s most influential union. Howether, this day which was supposed to be a show of force from the opposition, turned into a nightmare.

This year’s “Fête du travail” had a goal: unite people from every cause against a common “enemy” – the government. With the SNCF strike, the students blocking universities, the evacuation of Notre Dame des Landes and many more social demands, the government has had debatable responces to opposition these past few months. May Day came at a crucial point of Emmanuel Macron’s term, as he celebrates his first year in office. 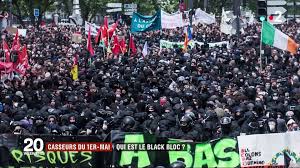 After a few hours of peaceful demonstration, a group of 1200 people who slowly moved to the front of the procession, dressed in all-black, started rioting. This intervention was planned by a group called “The Black Bloc”. It is an extreme left-wing association whose goal is to take down the “capitalist” society as it “prevents the human being from pursuing happiness”. They define themselves as “ungovernable”, and post their political claims on the internet where their message is spread. The group is present in different European countries like Germany, Italy and the UK, and this was not their first nor largest intervention.

The violent group targeted a Mcdonald’s restaurant as it they consider it to be a “symbol of capitalism”, they also burned down a car dealer near the Fast Food chain? Unclear what you mean here. According to the Mayor of Paris, the Black Bloc made “hundreds of thousands” worth of damage, and 119 people were arrested. A few of the most violent ones have been charged with rebellious conduct, degradation of public property and violence towards law officials. The images from the violent scenes remain debated on national television as the entire country wonders if this episode of violence could have been anticipated by the Paris prefecture. 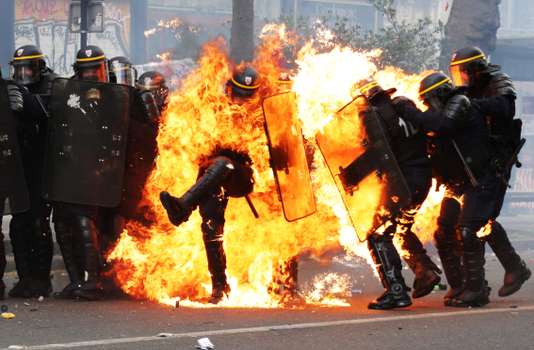 This demonstration of violence has been a real defeat to Emmanuel Macron’s opponents as their demands were left undiscussed. The focus was put on? a violent minorities and their actions which is understandable but harmful for the political debate in France.